The 01M is a 4 speed computer controlled FWD gearbox. VW Myth - they say -: The trans is sealed for life, and so is the 'special' fluid inside of it. Only dealerships can 'power flush and fill the system' I guess that means that once the trans fluid blows up, so does the trans. Late model Eurovans and Rialta Motorhomes have an 01P transmission. The 01P transmission works just like the 01M, shares many parts inside, valve body is virtually identical, and solenoids are the same. If you need solenoids or other small parts you can purchase them.

The 01M and its predecessor 096 are very similar to the other transmissions engineered and manufactured by STA: AR4, AD4 and AD8, which were deployed on Renault vehicles in the 1980s and 1990s. It is an electronically controlled transmission with a lockup torque converter, using planetary gears, clutch packs, and a gear-driven final drive with an open-differential. There is no chain inside this transmission. It does not have provision for a dipstick. It was determined that a dipstick and fill might invite owners to introduce incorrect or inferior fluid. More information on design and function can be found in VW's publications, mechanic's Self Study Programs SSP112 for early versions for the 92-94 096, or SSP172 for 01M from 95-06.

The transmission has an oil-to-liquid cooler mounted on top of the transmission. Transmission oil is heated/cooled by the engine antifreeze that runs through the cooler.

Some areas of failure on this transmission include leaks in the oil filling tube by removing the cap incorrectly, damage to plastic internals due to fluid over-temperature conditions, leaks in the transmission oil cooler, internal fluid pressure leaks from torn piston diaphragms, worn piston bores for solenoids in aluminum valve body, and the resulting worn clutches and bands. Occasionally, the plastic speedometer drive gear will break and fall off of the differential carrier and the speedometer will stop working. To repair this, the transmission must be removed and the differential disassembled far enough to replace the plastic gear. With age, the resistance in the wiring and/or electrical terminals between the valve body and transmission controller can increase. The additional resistance may prevent the computer from reading the faint pulses from the transmission speed sensors. Any sulfated connector and missing sensor signal causes the transmission to go to 'fail safe' or 'limp' mode. This mode keeps the transmission in Third gear and the gear indicator in the instrument panel indicates all gears are selected simultaneously.

The 01M transmission is a specialized transmission used only on Volkswagen vehicles, although very similar to the ones used on Renault vehicles. As a result, most local transmission shops or national chains won't have specific training, knowledge and equipment to test and re-machine vital parts of this transmission. This may result in several teardowns under warranty to get an acceptable result, if possible at all.

The correct fluid is a synthetic mineral oil, such as Pentosin ATF-1, Mercon V or Volkswagen G 052 162 A2. 3.750 liters is usually sufficient for a filter change. The transmission fluid is checked from underneath the vehicle while running and the transmission in park. This must be completed before the transmission fully warms up (35-38°C). Once running, the drain plug on the bottom of the transmission oil pan is removed with a 5mm allen wrench. Some fluid will drip out whether oil level is full or low. There is a plastic stack in the hole, similar to a chimney, which keeps all the fluid from running out. This stack maintains the proper level at the proper temperature. If the fluid is 'glugging' or just barely running out the bottom hole when the temperature of the transmission is in the range of 95F-113F, no further action is needed. Reinstall drain plug and put fill cap back on. If no fluid comes out, fill the transmission with specified fluid a little at a time until fluid is observed 'glugging' or just barely running out the hole in the bottom. No further action is needed. Install drain plug and fill tube cap.

The shifting of this transmission is controlled by the Transmission Control Module, or TCM. There are three shift modes that the transmission can be set to which alters the shift points as well as the speed of the shifts (amount of transmission slip between shifts). Factory Mode, Economy/Touring Mode and Sport Mode. Economy mode endeavors to keep the engine revolutions lower to save fuel, while Sport mode allows the engine to rev higher before shifts, as well as shift faster with a sacrifice to economy. Changing these modes require transmission programming through a factory scan tool.

This computer uses 'fuzzy logic' to learn the driving habits of the driver in order to set its specific shift points. If two or more drivers with different driving styles have been driving the car, the TCM may become 'confused' and start acting goofy. Such goofy behavior may manifest in hard shifting, slipping, trouble getting in gear at idle, etc.

A quick fix is to reset the 'fuzzy logic' by performing the following: Sitting in the driver's seat turn the ignition on without starting the car. Immediately put the accelerator to the floor. Count to five seconds. Release the pedal. Turn the key off then immediately start the engine.

If your problem is from a confused TCM, this will solve the problem. This will not reset trouble codes in the computer. That must be done with the proper OBDII scan tool such as the VAG 5052, VAG COM tool at the VW dealer.

Before the 01M transmission, VW used the 096 four-speed for Mk3 Golf/Jetta cars from 1992-1994. These cars will have a SPORT/ECONOMY switch near the shifter or on the dashboard to alter the shift points.

But the original ancestor was the AR4 transmission, deployed on Renault vehicles with longitudinal engines (4 and 6 cylinders) in the 1980s : R25, R21 and Espace. Two different versions for transverse engines were developed in the early 1990s : AD4 for 4 cylinders (Renault Clio, Mégane, Laguna, Safrane) and AD8 for 6 cylinders (Renault Laguna, Safrane). Both 096 and 01M VW transmissions are similar to the AD4, and many parts are interchangeable.

Some of the 096 parts were held over for the 01M transmission, such as oil filter, oil pan, filler tube, gaskets, speedometer gears, skid plate, etc. These transmissions have different torque converters and other internal parts that are not interchangeable.

You can buy most small parts for 01m from me. Just look at our shopping page and you can pay safely through paypal. click here —–>01m shopping page

Of course for best results use the OEM fluid. G052-162-A2 is the correct OEM fluid. I can sell you OEM Pentosin or FEBI/Bilstein brand. This is the exact right OEM fluid for 01m. to buy fluid or any other 01m small parts click here —->01m shopping page Use any other fluid at your own risk. But, I run Mobile 1 Multi-Vehicle in my own car. And I have several customers that have used Peak Multi-Vehicle in their car, and they report good success. One of the oil companies sells a “global” fluid that formally listed g052162a2 in its spec sheet. We’ve been offering that, as a cheaper option, and it’s been working perfectly. A customer pointed out that O’reilly auto parts had a “global” fluid that had the g052162a12 number right on the label. (they have since changed the label and it no longer shows that). We’ve used that also. Also some folks on the internet have reported good success with Valvoline Max Life Multi-Vehicle fluid. All these are RED fluids. The simple fact that a fluid is red DOES NOT make it incompatible with o1m.

Yes. You should do a flush. No one changes it since it’s “lifetime fill”, so it always looks bad. A flush will help clean it up. No, a flush will not cause your trans to fail. This is baloney and I get real tired of hearing this “urban myth” repeated.

You would need to remove the cooler and hook special fittings with hoses on them to allow the Trans pump to push the fluid out, while you maintain the Trans full. Most people don’t want to buy the fittings so they just do a “drain and refill” again a couple days later.

Fluid and filter change takes 4. I would have 1 or 2 extra on hand for valve body removal, because removing the valve body will allow “trapped” fluid out, and if the pan is off for long the torque converter will “drain” out a certain (unpredictable) amount. For the flush I use 9. 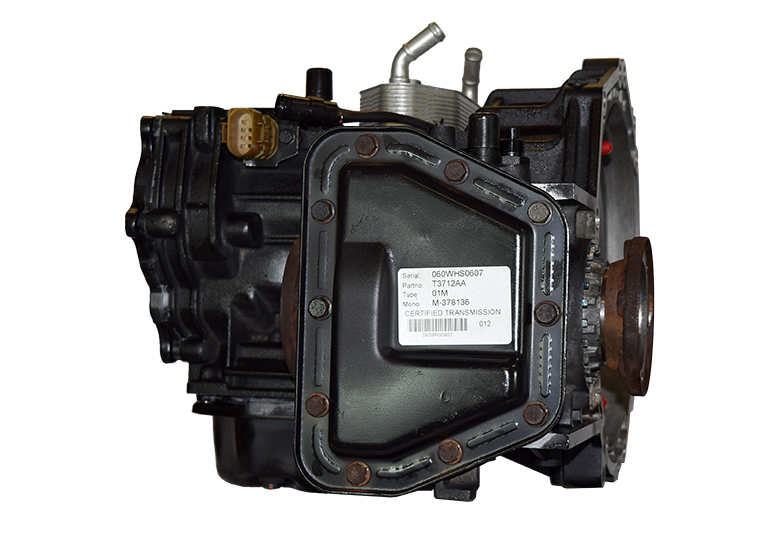 Graphing is for your peace of mind. Do it if you want to. This is the only way to verify your surge is a TCC problem and not an engine problem. You must scan the TCM with VCDS to confirm you are triggering no transmission trouble codes. Use VCDS or other full function OEM compatible scan tool. This shows how to reset transmission computer basic settings using VCDS. taken from ross-tech site. click here for more info—–>http://www.ross-tech.com/vag-com/cars/autotrans.html First, make sure there are no fault codes in the Auto Trans. Then, with the key in the on position, and engine OFF. Do not touch the accelerator pedal. [Select][02 – Auto Trans][Basic Settings – 04] Set Group to “000” [Go!] Press accelerator pedal all the way to the floor and count out loud 3 seconds. [Done, Go Back] Release the accelerator pedal. It is normal for there to be no explicit instructions or changes on the screen when you do the above procedure. The transmission controller does not provide any feedback that it has been successfully performed. For 09G transmissions, Basic Settings group 001 is used and the accelerator pedal is NOT touched.

I’ve driven a few cars with the Kerma mod done with the adjustment rammed all the way in, and they drove terribly! Clunking and banging on up shifts and downshifts. I’ve also read of transmissions that had this mod running hotter. This happens because the higher pressures tend to move the pressure regulator valve farther into the bore which tends to cut off torque converter charge, which is the same oil as cooler flow. But, this mod seems to be necessary on cars that have performance upgrades, but there has to be some control. I recommend 4 clicks. This raises line pressure from about 55 to about 70. Do not ram the adjustment all the way in. I can undo the mod and adjust it 4 clicks. Your car may flare on shifts after undoing the Kerma mod, until the computer relearns. Resetting adapts with VCDS may speed this process.

G68 Output speed sensor. It’s under the Left Side transmission mount. The bolts in that mount are stretch bolts so buy some new ones to replace them when you take them out. Notice that it unplugs over by the solenoid connector so most “checks” would be made over there. G38 Sun gear speed sensor. It may be called input speed sensor, but that’s not really its function. G22 Vehicle speed sensor. It’s used for cruise control and speedometer, but not for trans functions. F125 Multifunction Range sensor. This provides input to the TCM to let it know what position you’ve placed the shifter. It also provides reverse lights and starting only in neutral and park.