Back in 2001, most of our Ram Turbo Diesels with manual transmissions had five-speeds, either the Getrag used on First Generation trucks, or the New Venture NV4500 that was used on Second Generation trucks (1994-up). Only a few (24-valve High Output) Turbo Diesels had the six-speed New Venture NV5600. In Issue 30, pages 36-37, we discussed lubricants, wear issues, and the fully splined mainshaft upgrade to prevent 5th gear from sliding out of position on the NV4500 five-speed. In Issue 31, pages 23-27, we discussed a complete rebuild of the NV4500 at Standard Transmission and Gear Co. of Fort Worth, Texas.

Things have changed. Now there are a lot of NV5600s out there, having been used from 2000 up through the 2005 model year. This transmission has excellent ratios for our Turbo Diesels (5.63, 3.38, 2.04, 1.39, 1.00, and 0.73 forward gears, and 5.63 reverse ratio). Some owners are reporting problems with them, and the need for remanufactured or rebuilt transmissions has become steady, if not as large as the need for the upgrades to the NV4500. Some owners feel that overfilling with one to three quarts of lubricant in addition to the factory specification of about 4.2 quarts helps longevity, due to better oiling of the rear bearing. Various failures have been reported, and if the rear bearing seizes, the gear case can be cracked, making the “core” transmission of little value to a rebuilder. Many of the ’94-’01 NV4500s have been rebuilt successfully by small shops, general transmission shops, and owners. In this article, we will see that the NV5600 is a very different situation, requiring special knowledge, equipment, and procedures. The transmission weighs almost double the 200 pounds of the NV4500, so handling the parts alone is more than most people should consider.

It is worthwhile to provide a brief review of lubricants, based on my experience and on a discussion with a knowledgeable oil engineer who is very familiar with our Turbo Diesels and who has always given me good advice, whether or not his company makes a product that he would recommend for my application. It is refreshing to get advice to use a competitor’s product if that is what is best! He told me that the factory recommended lube, commonly marketed by Pennzoil, is good, but as with other non-synthethic products, will tend to wax at low temperatures and oxidize at high operating temperatures, compared to a good synthetic lube. He likes the Amsoil product for near-stock applications. The additive package is very good and the synthetic base stock behaves well. It is about like a 5-30 weight range using the engine oil scale. If your usage is much more severe, due to heavy towing beyond Dodge’s recommendations, high operating lube temperatures, and/or high horsepower usage, he prefers Torco Racing Transmission fluid (RTF), which is about like 10-40 weight on the engine oil scale. The additives in RTF might tend to attack brass synchronizers because of its GL-6 additives, but it will protect the gears better under heavy loads. Current equipment is not set up to test beyond GL-5, but Torco continues to treat their lubricants at the levels they used in the past to meet GL-6 requirements. The tradeoff could be that the synchronizers won’t work as well after reaching high mileage, but that is better for a transmission that will be rebuilt periodically anyway, compared to gear breakage from high horsepower and heavy towing. As he mentioned, if you have significantly exceeded factory usage, you have to make compromises. He also pointed out that the higher cost of the Torco RTF might discourage changing lube as often, and it is always better to change lube regularly, since wear metals and particulates end up in the oil with no filtration to remove them.

If you are towing heavy trailers, carry heavy loads, or have added horsepower, consider the Trans-Cool coolers (see TDR Issue 61, page 99) offered by Geno’s Garage. Testing while towing has shown a reduction in lubricant operating temperature, and they add about a quart of capacity. They have an extensive fin system to help dissipate heat, and are thick walled aluminum castings. The package containing two coolers and a set of mounting bolts weighs about 12 pounds. Charlie Jetton and Richard Poels of Standard Transmission and Gear, Fort Worth, Texas, discussed the procedures with me for rebuilding a New Venture 5600 transmission correctly. If anyone really wants to try rebuilding this model transmission under the shadetree, there are 41 pages on rebuilding this transmission in the factory Service Manual. However, the complexity shown in the accompanying photographs and captions will probably convince you to let a professional transmission shop with lots of experience with NV5600s do the work.

The way the NV5600 comes apart, and correspondingly, the way it comes together, is complicated. The bellhousing seems logical to remove and get out of the way, but it is almost last in the process of disassembly. Actually, it is far more than just a bellhousing. It is the transmission front plate and the mounting plate for many components. It reminds one of the midplate of a Muncie or Super T10 automotive four-speed transmission, where the midplate serves as the mounting point for the main and cluster shafts. Standard Transmission stresses cleanliness and goes to extremes to ensure the parts and housing are clean. The NV5600 gearbox does not have a filter, so any grit, metallic dust, or particles will circulate and cause more damage. They use both solvent washers and a hot tank. They use a special assembly lube, with high pressure additives. This lube “sticks” better than oil if the transmission is stored a while after rebuilding. Synchronizer rings are very susceptible to damage if they don’t get lubrication right away, so the assembly lube is important protection for them. Disassembly and reassembly are far more complicated than a NV4500 five-speed. The rebuilder needs special knowledge to disassemble or reassemble the transmission without damaging components. The NV5600 is very heavy, almost 400 pounds, which is about double the weight of the NV4500 five-speed. Individual components and subassemblies are correspondingly heavier than the 4500. Reassembly is complex and must be performed in a specific order. Certain parts like the synchronizer assemblies need careful inspection and are hard to assemble with the springs and balls inside them. Just a little movement of the slider will cause the balls to fly everywhere. The parts need to be assembled in a very specific orientation or the gears will lock up.

In addition to specialized knowledge, what takes rebuilding a 5600 away from the “generic, any rebuilt unit is the same” concept is the extreme need for cleanliness and pride in the work. Another important consideration is that as the transmission gets hot during use, it grows; so correct, precise shimming the end play of the shafts will be critical for longevity. Precise shimming takes time and commitment. The factory allows a range of clearance, but Standard Transmission has found that the tolerances need to be much more carefully set if the transmission is to live. They use dial indicators and presses, and they check to be sure there is no gap between a race and gear shoulder. When Standard gets transmissions that others have rebuilt previously, often the oil diverters (cluster oil diverter and input shaft oil diverter) are omitted and then the parts fail quickly.

A diagram of the transmission and specific rebuilding procedures are covered with photos and captions.

Diagram of the NV5600 transmission and internal components.

This photo shows the mainshaft turned over, starting to build the back side with first and second gear. Second gear is on, inner and outer synchronizer parts, and the friction ring are installed. The punch indicates the tab on the inner ring that has to go inside a slot in the 1, 2 hub shown in the next photo.

The punch indicates the notch in the hub where the tab of the inner synchronizer must go. Misalignment will result in broken tabs when the parts are pressed together.

Cluster gears are pre-assembled with the big press. It takes a lot of tonnage to press a 6″ gear onto the cluster shaft.This photo shows the disassembled cluster.

Pressing the 5-6 synchronizer hub onto the main shaft with a 50 ton press. This hub is not a light press fit. Assembly of many components requires this heavy-duty press. A 20 ton press is not enough. 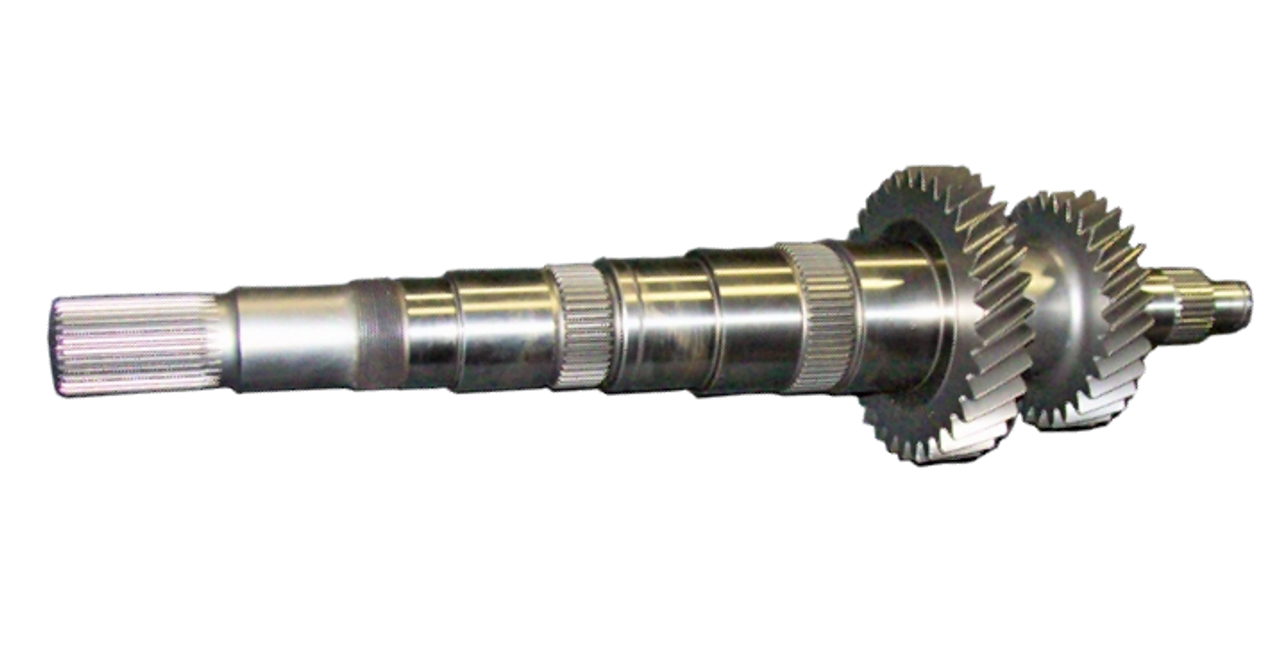 This lifting tool facilitates picking up the assembly without the components spreading apart in order to put it into the front end of the transmission case (bellhousing). This assembly is heavy enough that the rebuilder uses a hoist to pick it up (190 pounds).

The assembly is placed into the bellhousing before the main case is installed. The main case weights 88 pounds and the tailhousing weighs 54 pounds.

Installing the input and main gear trains, the cluster assembly, and the shift forks and rails. These components must all be installed simultaneously into the bellhousing/front case. This photo makes it clear that the bellhousing is far more than a simple bellhousing like the NV4500 uses. This photo shows that it is also the front plate and assembly alignment fixture for the NV5600 transmission.

The front end of the main case. It is just an empty hole; the bellhousing/front plate is the part that retains the components.

Sophos and pfSense are well equipped to deal with both run-of-the-mill attacks and sophisticated intrusion attempts. This brief overview emphasizes the notable differences in their approach and capabilities. Sophos pfsense. 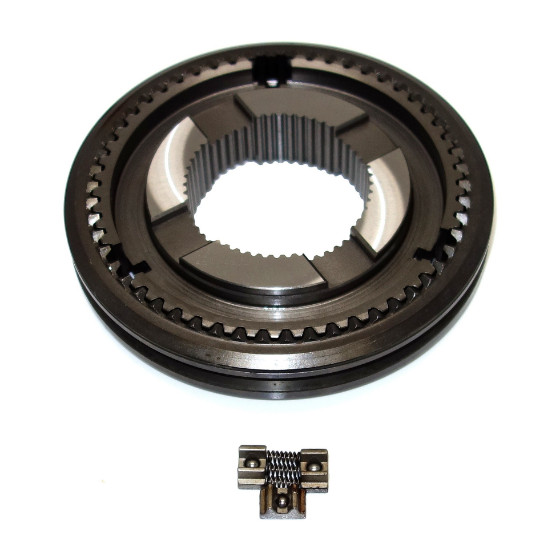 The main case being dropped onto the bellhousing/front plate and gear train assemblies.

The rear of the case iron main case and shimming the main shaft. Clearance must be checked from the rear end as shown. Shims go on the front end under the front bearing retainer. You must turn over the partially assembled transmission to change shims each time you change them. By this point in the assembly process, the transmission weighs more than three hundred pounds.

Mainshaft shim going into the front bearing retainer at the input shaft. Cluster shims are installed by an analogous procedure in the front, and checked from the rear. After shimming, put on reverse gear and install the big nut with Loctite.

Tightening the big nut on the mainshaft with a special deep socket to 250 ft-lb. 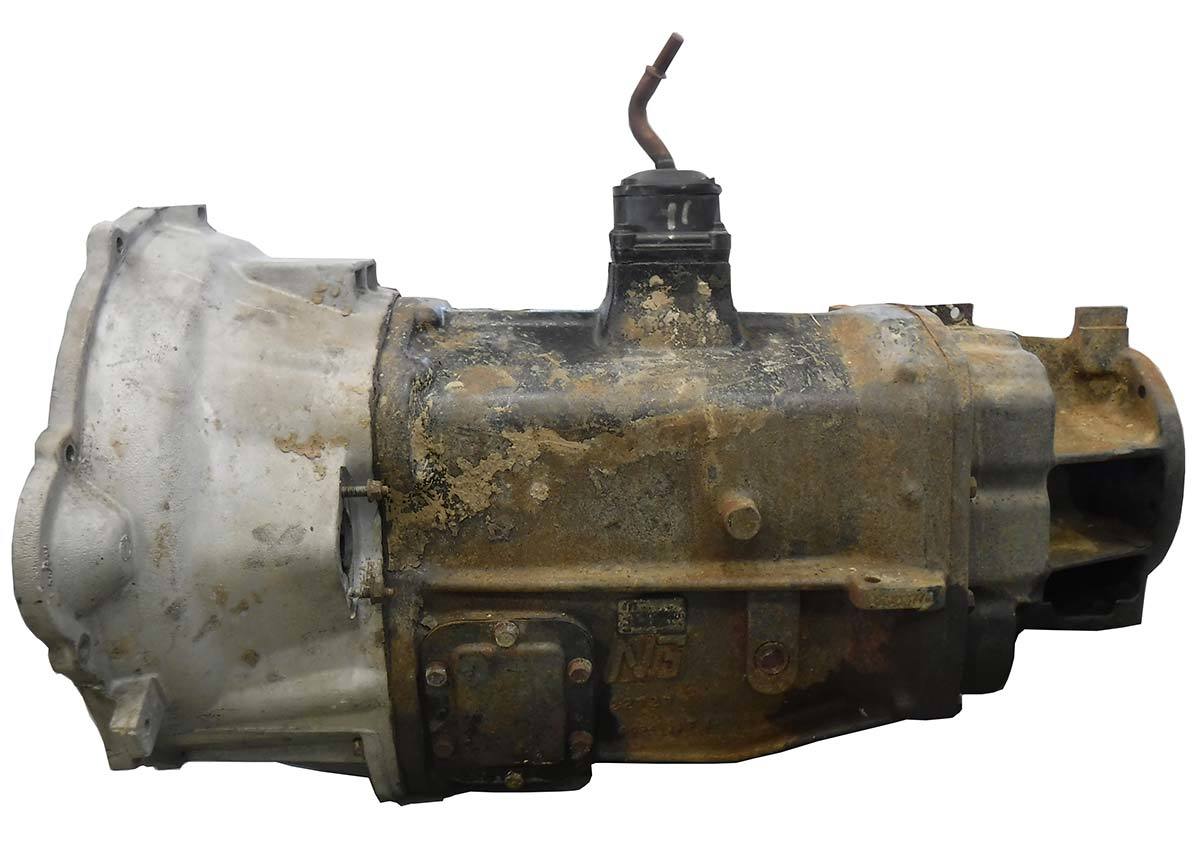 Conclusion for the NV5600 Discussion

In summary, the NV5600 is best maintained with proper lubricant, regular changing of the lube, and keeping your load or trailer within factory recommended weight limits. When the transmission needs to be rebuilt, send it to a shop you trust because of their knowledge and the care they take with it.