Note: this document will print in an appropriately modified format (6 pages)

The chemical changes we observe always involve discrete numbers of atoms that rearrange themselves into new configurations. These numbers are HUGE— far too large in magnitude for us to count or even visualize, but they are still numbers, and we need to have a way to deal with them. We also need a bridge between these numbers, which we are unable to measure directly, and the weights of substances, which we do measure and observe. The mole concept provides this bridge, and is central to all of quantitative chemistry.

Owing to their tiny size, atoms and molecules cannot be counted by direct observation. But much as we do when 'counting' beans in a jar, we can estimate the number of particles in a sample of an element or compound if we have some idea of the volume occupied by each particle and the volume of the container.

Once this has been done, we know the number of formula units (to use the most general term for any combination of atoms we wish to define) in any arbitrary weight of the substance. The number will of course depend both on the formula of the substance and on the weight of the sample. But if we consider a weight of substance that is the same as its formula (molecular) weight expressed in grams, we have only one number to know: Avogadro's number, 6.022141527 × 1023, usually designated by NA.

Amadeo Avogadro (1766-1856) never knew his own number!
Avogadro only originated the concept of this number, whose actual value was first estimated by Josef Loschmidt, an Austrian chemistry teacher, in 1895.

6.02 × 1023 of what? Well, of anything you like: apples, stars in the sky, burritos. But the only practical use for NA is to have a more convenient way of expressing the huge numbers of the tiny particles such as atoms or molecules that we deal with in chemistry. Avogadro's number is a collective number, just like a dozen.

Before we get into the use of Avogadro's number in problems, take a moment to convince yourself of the reasoning embodied in the following examples.

The atomic weights of oxygen and of carbon are 16.0 and 12.0, respectively. How much heavier is the oxygen atom in relation to carbon?

Solution: Atomic weights represent the relative masses of different kinds of atoms. This means that the atom of oxygen has a mass that is 16/12 = 4/3 ≈ 1.33 as great as the mass of a carbon atom.

The absolute mass of a carbon atom is 12.0 unified atomic mass units (What are these?). How many grams will a single oxygen atom weigh?

Suppose that we have N carbon atoms, where N is a number large enough to give us a pile of carbon atoms whose mass is 12.0 grams. How much would the same number, N, of oxygen atoms weigh? 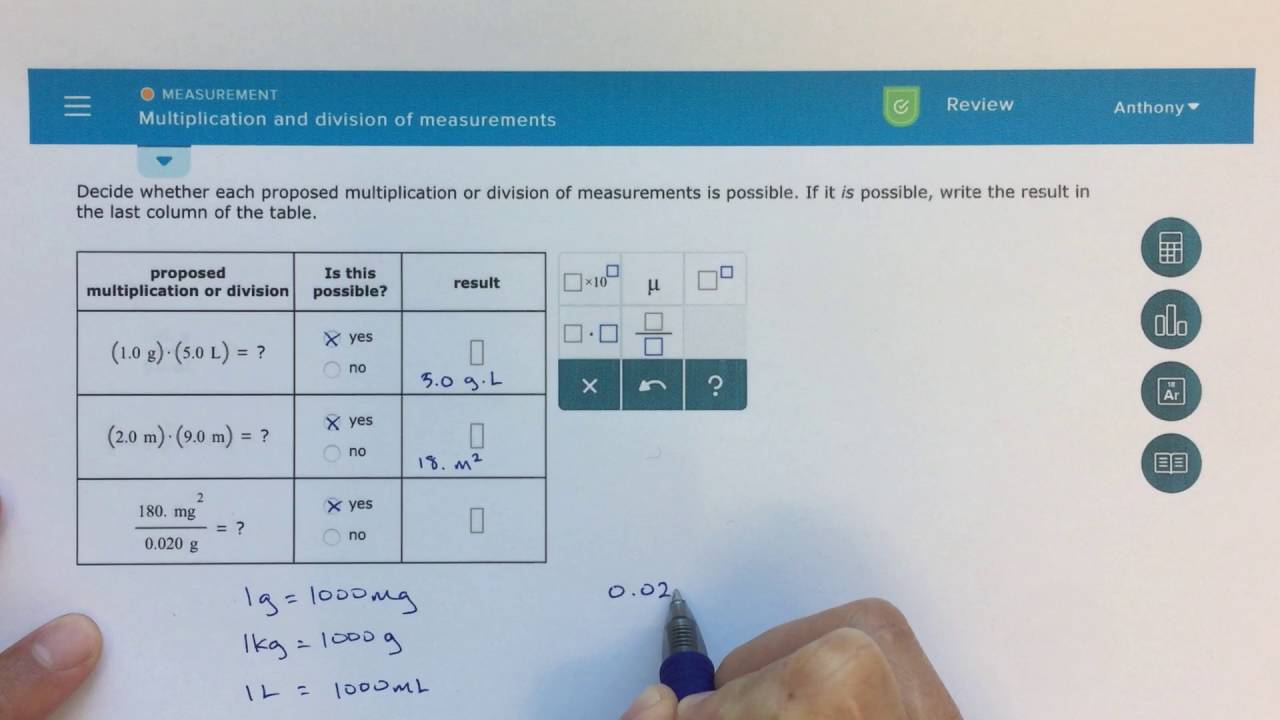 • It is a number, just as is 'dozen', and thus is dimensionless.

• It is a huge number, far greater in magnitude than we can visualize; see here for some interesting comparisons with other huge numbers.

• Its practical use is limited to counting tiny things like atoms, molecules, 'formula units', electrons, or photons.

• The value of NA can be known only to the precision that the number of atoms in a measurable weight of a substance can be estimated. Because large numbers of atoms cannot be counted directly, a variety of ingenious indirect measurements have been made involving such things as Brownian motion and X-ray scattering.

• The current value was determined by measuring the distances between the atoms of silicon in an ultrapure crystal of this element that was shaped into a perfect sphere. (The measurement was made by X-ray scattering.) When combined with the measured mass of this sphere, it yields Avogadro's number. But there are two problems with this: 1) The silicon sphere is an artifact, rather than being something that occurs in nature, and thus may not be perfectly reproducible. 2) The standard of mass, the kilogram, is not precisely known, and its value appears to be changing. For these reasons, there are proposals to revise the definitions of both NA and the kilogram. See here for more, and stay tuned!

Wikipedia has a good discussion of Avogadro's number

2 Moles and their uses

The mole (abbreviated mol) is the the SI measure of quantity of a 'chemical entity', which can be an atom, molecule, formula unit, electron or photon. One mol of anything is just Avogadro's number of that something. Or, if you think like a lawyer, you might prefer the official SI definition:

The mole is the amount of substance of a system which contains as many elementary entities as there are atoms in 0.012 kilogram of carbon 12

Some useful mole links
Wikipedia article on the mole
Mystified by the Mole? Stop it!
A short history of Avogadro's Number
National Mole Day site

Avogadro's number NA = 6.02 × 1023, like any pure number, is dimensionless. However, it also defines the mole, so we can also express NA as
6.02 × 1023 mol–1; in this form, it is properly known as Avogadro's constant. This construction emphasizes the role of Avogadro's number as a conversion factor between number of moles and number of 'entities'.

Is this answer reasonable? Yes, because 80 is an extremely small fraction of NA.

The atomic weight, molecular weight, or formula weight of one mole of the fundamental units (atoms, molecules, or groups of atoms that correspond to the formula of a pure substance) is the ratio of its mass to 1/12 the mass of one mole of C12 atoms, and being a ratio, is dimensionless. But at the same time, this molar mass (as many now prefer to call it) is also the observable mass of one mole (NA) of the substance, so we frequently emphasize this by stating it explicitly as so many grams (or kilograms) per mole: g mol–1.

Don't let this confuse you; it is very important always to bear in mind that the mole is a number and not a mass. But each individual particle has a mass of its own, so a mole of any specific substance will always have a mass unique to that substance.

The plant photosynthetic pigment chlorophyll contains 2.68 percent magnesium by weight. How many atoms of Mg will there be in 1.00 g of chlorophyll?

Is this answer reasonable? (Always be suspicious of huge-number answers!) Yes, because we would expect to have huge numbers of atoms in any observable quantity of a substance.

Molar volume of a pure substance

This is the volume occupied by one mole of a pure substance. Molar volume depends on the density of a substance and, like density, varies with temperature owing to thermal expansion, and also with the pressure. For solids and liquids, these variables ordinarily have little practical effect, so the values quoted for 1 atm pressure and 25°C are generally useful over a fairly wide range of conditions. This is definitely not the case with gases, whose molar volumes must be calculated for a specific temperature and pressure.

Methanol, CH3OH, is a liquid having a density of 0.79 g per milliliter. Calculate the molar volume of methanol.

Solution: The molar volume will be the volume occupied by one molar mass (32 g) of the liquid. Expressing the density in liters instead of mL, we have

The Mole Avogadro's Number And Stoichiometry

The density of metallic strontium is 2.60 g cm–3. Use this value to estimate the radius of the atom of Sr, whose atomic weight is 87.6.

Note: Your calculator probably has no cube root button, but you are expected to be able to find cube roots; you can usually use the xy button with y=0.333. You should also be able estimate the magnitude of this value for checking. The easiest way is to express the number so that the exponent is a multiple of 3. Take 54.8E–24, for example. Since 33=27 and 43 = 64, you know that the cube root of 55 will be between 3 and 4, so the cube root should be a bit less than 4 × 10–8.

So how good is our atomic radius? Standard tables give the atomic radius of strontium is in the range 192-220 pm, depending on how it is defined.

Markwon is a markdown library for Android. It parses markdown following commonmark-spec with the help of amazing commonmark-java library and renders result as Android-native Spannables. No HTML is involved as an intermediate step. No WebView is required. It's extremely fast, feature-rich and extensible. Markdown android emulator.

Make sure you thoroughly understand the following essential ideas which have been presented above. It is especially important that you know the precise meanings of all the highlighted terms in the context of this topic.

The currently accepted formal definition of a mole is the number of carbon-12 atoms in exactly 12 grams of the pure substace. This is not a good operational definition, however, because it takes too long to find, purify, and count all those atoms. The best experimental value is based on x-ray diffraction experiments on silicon crystals and puts the number within 0.0000010 of 6.0221415 x 10^23. However, that number is not satisfactory to the perceptive (read 'smart aleck') student of chemistry who challenges his teacher with the fact that the definition requires that Avogadro's number be an integer. Because the definition of a (kilo)gram, represented by a platinum- iridium cylinder stored in Severes, France, changes slightly with calibration experiments and cleaning, the size of the mole theoretically changes proportionally. Fox and Hill, two noun-named professors at Georgia Tech, propose to define the kilogram in terms of a fixed value of Avogadro's number. Perhaps you and your students can determine why they chose the value they propose (602,214,141,070,409,084,099,072). Once you have defined NA, then the kilogram is determined and you can tell the keepers of the kilogram cylinder that their work is done.